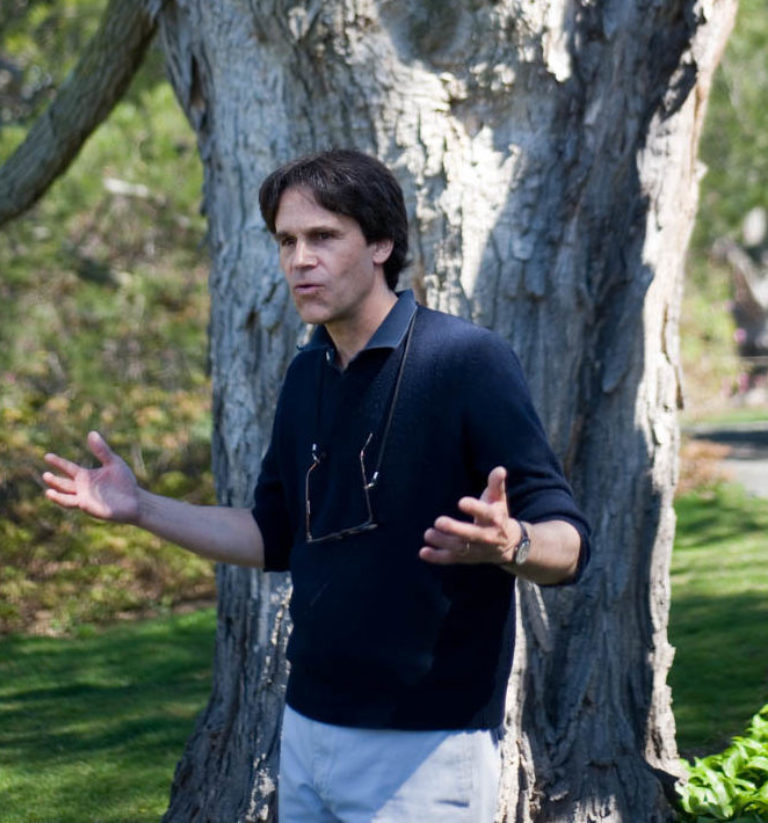 I have been photographing the trees at Wave Hill for more than two decades, and they have become a part of my life. Most months, when I am back to teach, I take a little tour to check them out, make sure they are okay and renew my connections with them. My daughter used to tease me that I cared more about trees than about people, and though she didn’t have it quite right, it is true that my subjects in photography tend to be more often arboreal than human. Trees live longer than we do, they accumulate a greater variety of unusual scars and features, they are not vain or critical, and not one is the same as another. Each tree is a container for the emotions of every person who has ever looked at it. They suffer us to expand, but if we were to go away they would take over. As I sit here at home during these weeks of self-isolation, I find myself missing certain trees and wondering how they are doing as the spring progresses. Here are six of my favorites at Wave Hill.

Hidden away at the back of the Conifer Slope on the north edge of the property, this little tree has changed hardly at all in all my years of photographing it. That is a good sign and not surprising, since it is one of the longest-lived species and contains among its members the largest trees on earth. Native to California, giant sequoia are rarely planted this far east and are said to grow even more slowly in our humid lowlands than in the dryer altitudes of their natural home in the Sierra Mountains. It is great to think, though, of how, in a few millenia, if left alone, and if the planet warms no further, this tree will begin to tower over Wave Hill House and the Hudson, far taller than anything else growing in this region for miles around.

What can you say about a sugar maple? It is the quintessential New England tree, and speaks of stone walls, sap buckets, autumn’s orange leaves, and pastures white with frost. It is a cold-loving tree, and the warming climate is gradually moving its native range north; the continued presence of this one at Wave Hill is an anomaly, and a tribute to the care of the garden’s horticultural staff. I first photographed it in the late 1990s, and I’m not embarrassed to say that ever since I’ve measured my life by it. Its loss of limbs has corresponded to losses of my own, and I wonder if its slow passage into senescence is not perhaps also a harbinger of my own. Although slightly jiggled and cockeyed, this picture appeals to me because it contains not only the river and another lovely tree at Wave Hill, the weeping beech—but also my student Beverly, herself caught in the act of photographing still another tree on the property, the gigantic linden (out of the frame of the picture) in front of Wave Hill House.

Part of the pleasure of Wave Hill’s treescape is its mix of native and exotic specimens all growing together to form a unique kind of garden ecosystem. Most staff at Wave Hill—and among them I include my main source for all Wave Hill tree information, Charles Day—have tended to assume that this native cherry must already have planted itself here before the original owners transformed the property into the beginnings of the landscape we know today. Certainly its swooping, lopsided, slightly threatening mature form would not suggest much human forethought in its current brooding presence on the lawn just east of Wave Hill House. Like the sugar maple, it is a tree that actively “belongs” here yet which now seems almost an outlier among the exotic cultivars and well-mowed lawns that surround it. Behind it rises the tree that most visitors remember instead, the pretty, perfectly regular Wave Hill House sweetgum, with its brilliant color and sharp seed balls.

My students and I have photographed this tree from every angle, in every type of weather, and in every season, and yet still it defies definition, shooting out in new directions that no camera can ever seem entirely to frame. Its ragged crown is one of the first things you see sticking up by the pergola when you enter the garden from the parking lot, and it draws you along the paths, past other trees and flower borders, like the sculpture in the innermost room of a labyrinth. Several astonishing hornbeams grow around New York City—one in the New York Botanical Garden comes to mind, and another, an American species, in Prospect Park—but none I think is as large and strangely suggestive as this one.

Even more than the giant sequoia mentioned above, Wave Hill’s lacebark pine, with its green-and-yellow exfoliating bark and its limbs twisting in all directions, is one of Wave Hill’s true exotics, a large and rare specimen of a storied conifer native to China. A few growing in a park outside Beijing today are said to be more than eight hundred years old; this one is probably not more than seventy-five. Half-hidden by a thicket of bottlebrush buckeye, and casting a dense shade from its thick branches, the tree, when I return to it on my walks, always fills me with a sense of privacy and calm, as if I were the only visitor to Wave Hill to have seen it. A couple of years ago a visitor had the temerity to scratch their initials in the bark of this tree. Far from encouraging others, the brazen act led to a surge of protectiveness among Wave Hill’s thousands of other visitors, who could be heard, as they walked through the gardens, discussing the crime and vowing to keep watch over the tree. Evidently they felt their own personal connection to the tree, and with that a responsibility for it.

It is perhaps typical of Wave Hill that the lacebark pine, one of the most unusual trees in the city (pictured here on the left) grows literally in the shadow of one of the largest specimens of what was until recently at least one of the city’s most typical: the American elm. Most visitors to Wave Hill, absorbed in the sinuous convolutions of the lacebark, miss the elm across the path entirely; only when they are standing quite far back—up by the reflecting pool, say, or in the Wild Garden—are they on a position to take in the massive crown of what, from the path below, consists of no more than a trunk going up and up. I like this picture because it memorializes, in all its fall glory, another favorite tree of mine at Wave Hill, lost in 2013: the purple beech that used to grow at the top of the Wave Hill House lawn. Of Wave Hill’s many distinctions, one rarely mentioned is that nowhere else in the five boroughs do three of New York City’s designated Great Trees grow in such close proximity: the elm, the lacebark pine, and the sugar maple all grow within a few yards of each other along this gravel path. A fourth official Great Tree, the Giant Sequoia, is just down the hill on the Conifer Slope.

As I sit here at home, walking around Wave Hill in my mind, I find myself visiting many other trees around the garden—the massive white pine just west of Wave Hill House, the English oak over toward Glyndor, the dawn redwood and baldcypress on the main lawn, and all the magnolias just now probably bursting into bloom. I miss them. I envy the gardeners who still get to see them. But I am glad to think they are all there, well cared-for, and will be there whenever I am able to come back.

Benjamin Swett has taught photography workshops at Wave Hill for more than a decade, and his photographs of New York City’s trees have been exhibited here twice. He is the author of New York City of Trees, which won the 2013 New York City Book Award for Photography, and Route 22, among other publications. His essays about photography, trees, and life have appeared or are forthcoming in Cabinet, Fiction, Orion, Prism International and Salmagundi. 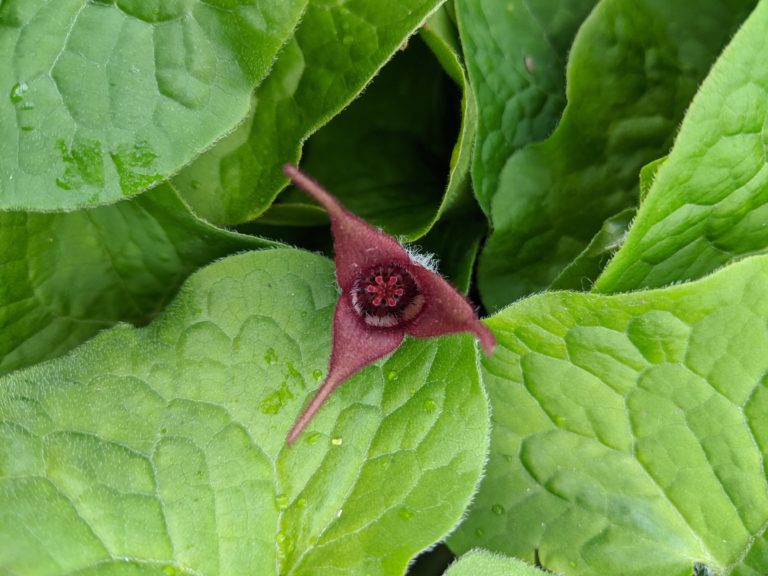 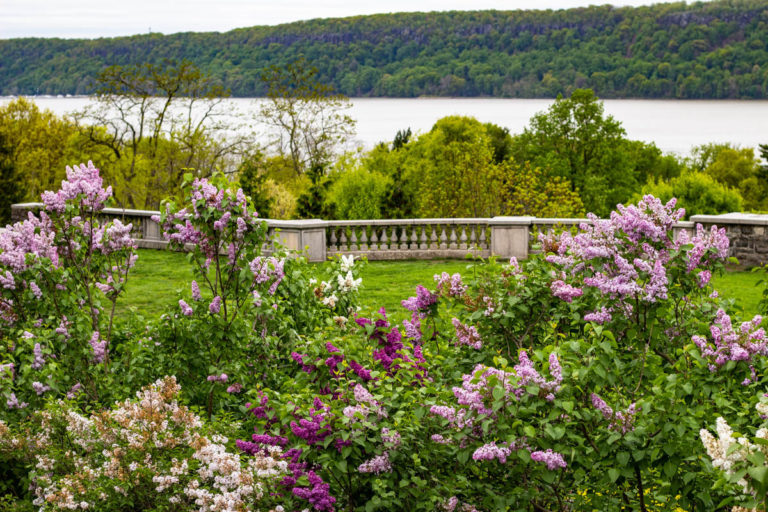