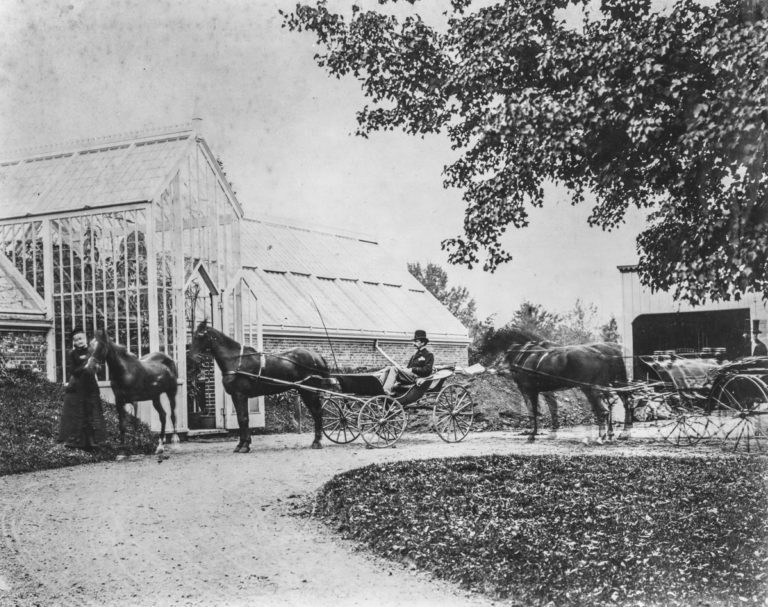 19th Century and the Perkins Legacy 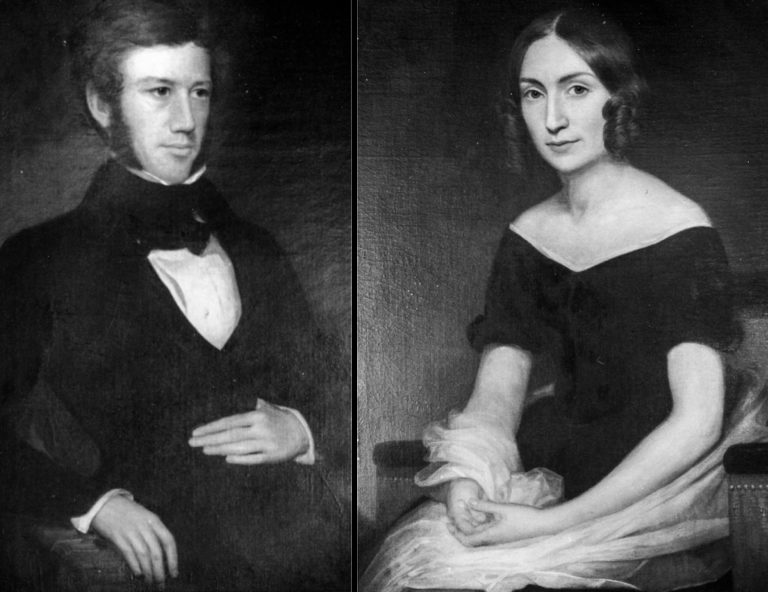 When William Lewis Morris acquired land in Riverdale, it was still relatively remote and rural. He and Mary referred to the property as their Yonkers farm. She may have named Wave Hill. Possibly, coming up from the river, the rolling terrain resembled waves.

In 1836, William Lewis Morris purchased 15 acres in what was later called Riverdale for his wife, Mary Elizabeth Babcock, and, ultimately, seven children. A prominent New York lawyer, He was the grandnephew of Lewis Morris, a signer of the Declaration of Independence, and Gouverneur Morris, penman of the Constitution. His brother Robert Hunter Morris was three times mayor of New York. By July, 1843, the main section of what the family call Wave Hill was built and the family moved in. Although Morris retired young and took up permanent residence there, he and his children moved back to Manhattan in 1851 when his wife died, and the estate was managed by his nephew Edward Morris.

The opening of the railway line along the eastern bank of the Hudson River to Cold Spring in 1848 made the area easily accessible from the city and encouraged the development of "villa communities." These planned neighborhoods, a relatively recent aspect of suburban development at that time, preserved the area's natural beauty by encouraging large plots and a limited number of structures. In 1852, a group of New York merchants, headed by WIlliam Woodward, built a villa community north of the Morris land, which named it Riverdale. In 1856, Henry Foster Spaulding and partners began a villa development south of the Morris land, based on a model in New Jersey, Llewellyn Park. The distinctive feature of "The Park-Riverdale," as it was known, was a five-acre parcel set aside for common use as “ornamental pleasure grounds and walks.” This is now New York City-owned Riverdale Park. Spaulding Lane winds down around the southern edge of Wave Hill to meet up with Riverdale Park. 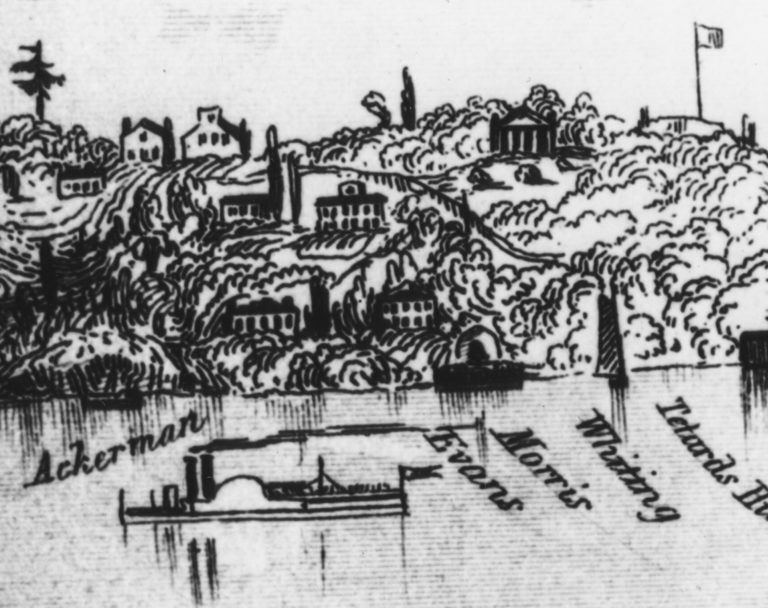 Houses were identified by the family name of the owner. The Whiting house stood where Seton Park is today. 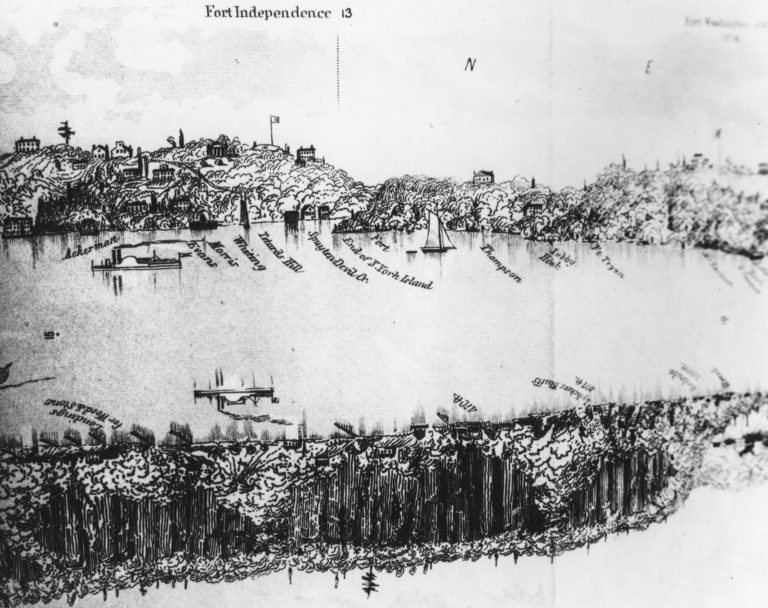 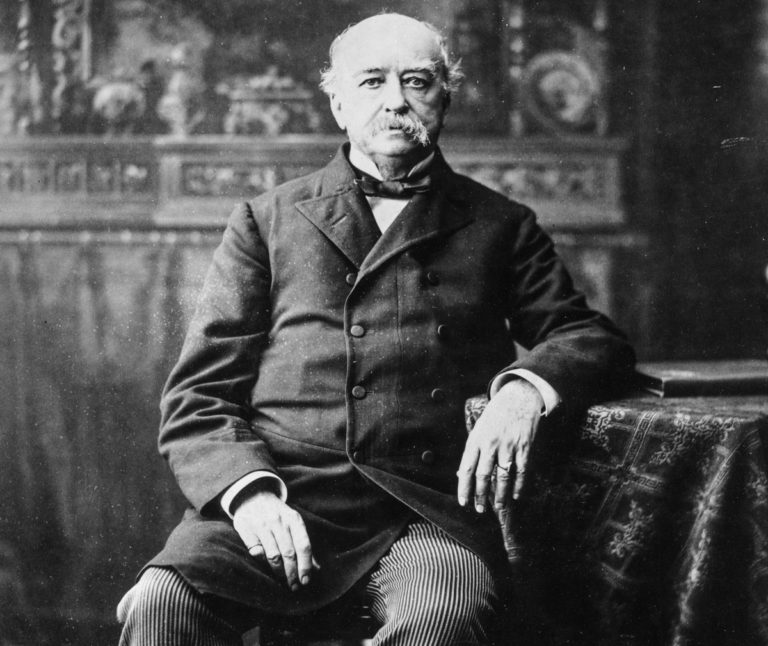 Involved for several years in his father's his business, Appleton became a partner in 1838, when he was 24. Both father and son were involved in the evolution of the business from dry goods to book-selling and then publishing. When his father retired, Appleton and his four brothers became senior partners of the firm. 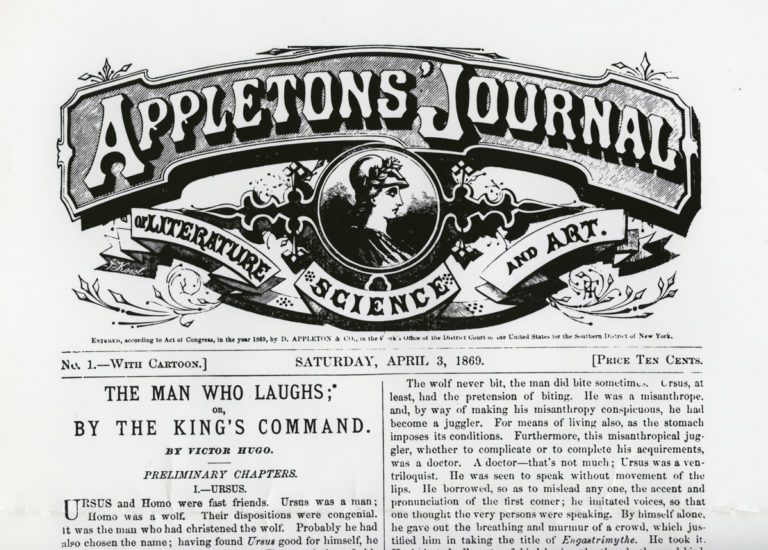 As publisher of Appleton's Journal and Popular Science Monthly, Appleton made science accessible to urban Americans. 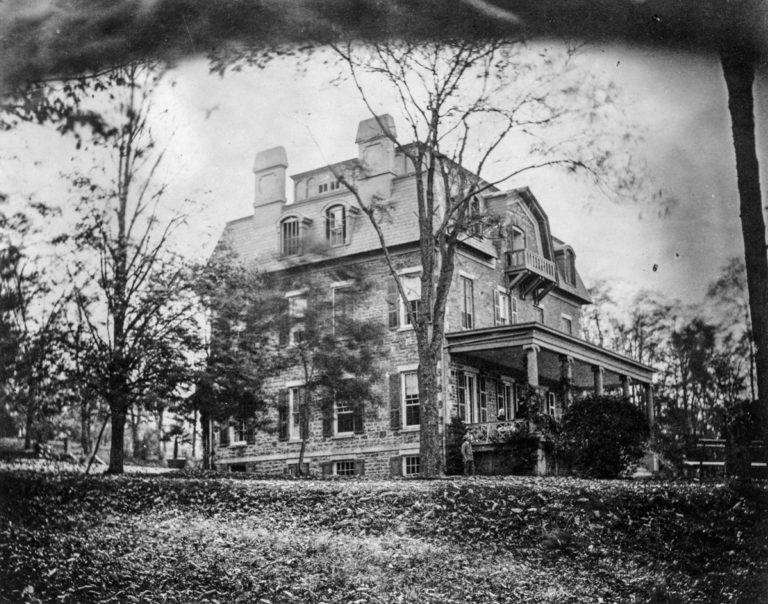 The house, used as a summer residence, boasts a more Second Empire look to it, boasts a mansard roof and a clerestory, probably part of the house's air-circulating system. For his retirement, Appleton also built a large dining room/bedroom addition.

A portrait from the late 1870s features the Appleton children, William Worthen (in carriage) and Mary (standing) in front of the greenhouses and stable built by the family.

In 1866, the Morris homestead was sold to a New York publisher, William Henry Appleton, a man with wide interests in the environment, science and social issues. Appleton included in his circle natural scientists T.H. Huxley, John Tyndall and Charles Darwin. Indeed, Appleton was Darwin's American publisher.

In 1811, a grid pattern was devised for streets and avenues on Manhattan island. When the Bronx was added to New York City—in 1874 and in 1895—the city tried to extend the grid pattern north. The first time, landowners in Riverdale resisted, and invited noted landscape architect Frederick Law Olmsted, who designed Central Park and Prospect Park with his partner Calvert Vaux, to view the landscape here. His report of 1876, authored with city engineer J. James R. Croes, successfully argued that the unusual topography of the land was best suited to an organic street plan following the contour of the terrain rather than a rigid grid.

One of the nation’s leading financiers and a pioneer in the field of conservation, midwesterner George Walbridge Perkins and his family first moved to Riverdale in 1893 when, at age 30, he assumed the post of vice president at the New York Life Insurance Company. In 1900, he became a partner of J.P. Morgan and was instrumental in the creation of U.S. Steel and other conglomerates. 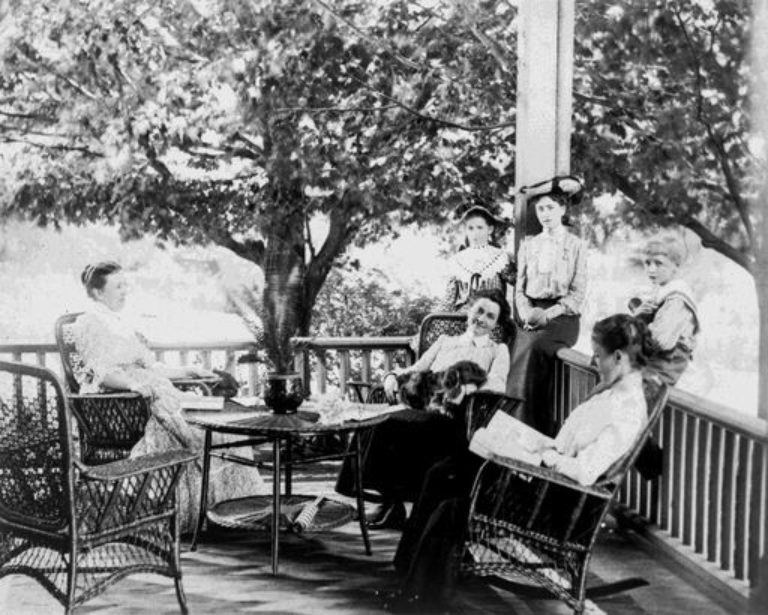 Mrs. Perkins (left), her two children Dorothy and George, Jr., and guests, enjoy the veranda of Glyndor. In 1895, the Perkins family had purchased the house from Oliver Harriman—who called it Nonesuch—and enlarged and renamed it. The name Glyndor is formed from the first names of the family—George, Evelyn (or Evelina) and Dorothy. 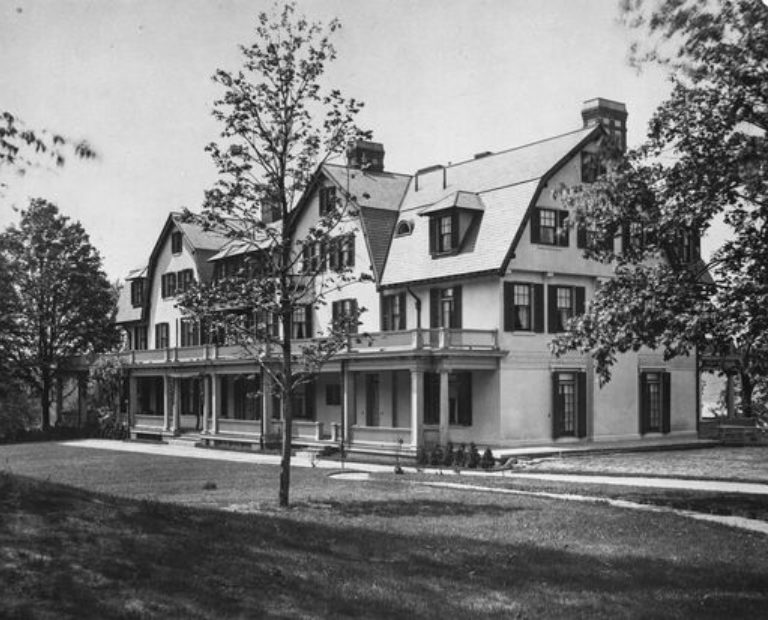 Mr. Perkins hired C. Grant LaFarge, son of the stained-glass artist John LaFarge, to enlarge the family's new home Glyndor. The other houses he owned were used by family members or rented to friends. 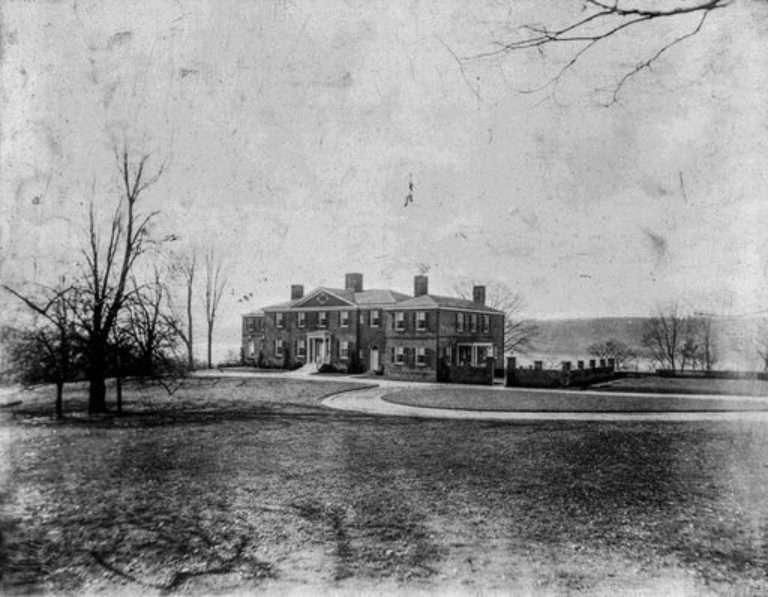 In 1926, six years after Mr. Perkins' death, Glyndor was struck by lightening and severely damaged. Mrs. Perkins commissioned architects Butler and Corse to build a new, smaller house, reusing the site and some of the original foundation walls. It was called Glyndor II.

Between 1893 and 1911, Perkins acquired numerous pieces of land, including the Appleton villa, to assemble an 80-acre estate. His purchases represent the core of today's Wave Hill,

An original thinker, Perkins believed that business was a partnership between employers and workers. He introduced progressive ideas into labor relations. Nearing 50, Perkins retired from business to devote himself to public causes. In 1900, then-governor Theodore Roosevelt appointed Perkins to the Palisades Interstate Parks Commission. Perkins joined Theodore Roosevelt in forming the Progressive Party in 1912. He contributed to the management of food supply during World War I and was involved with the Red Cross, Liberty Loans, the United War Work Campaign and the YMCA. George W. Perkins died in 1920, but his widow, Evelina Ball, continued to live at Glyndor until 1960. Their daughter Dorothy and her family lived at Wave Hill House in the 1930s.

After George Perkins' death, Evelina carried on his tradition of civic duty. During that time, few major changes were made to the heart of the Wave Hill property. She gave two Victorian villas located below Wave Hill, adjacent to the railroad, to the Riverdale Country School. With the Dodge, Delafield and Douglas families, Mrs. Perkins donated 42 acres of waterfront, above and below the tide line, to New York City. She continued to rent Wave Hill House, which was occupied from 1942 to 1945 by the celebrated conductor Arturo Toscanini. From 1950 to 1956, the house was leased to the British delegation to the United Nations. Harold MacMillan, John Foster Dulles, Konrad Adenaur and even the Queen Mother Elizabeth of England were among the many guests.

The Perkins’s son, George Perkins Jr., shared many of his father’s interests. He held positions in private industry, public service, education and government. He served as assistant secretary of state for European affairs from 194 to 1953 and ambassador to NATO from 1955 to 1957. He continued the work of his father at the Palisades Interstate Parks Commission, serving as secretary, vice president and president.

George Perkins Senior's greatest interest was the gardens. He worked with Albert Millard, a landscape gardener trained in Vienna, carefully engineering all the "natural" paths and gardens, interspersing many rare trees and plants with native species, all in an effort to unify two separate estates. In 1903, he surrounded the property with a low fieldstone wall with wrought-iron entrance gates. In 1906, Perkins added the Palm House, possibly designed by Robert Byers, his personal architect, or, more likely, Lord & Burnham. .

Across the river, Perkins’s involvement as initiating and founding chairman of the Palisades Interstate Park Commission was pivotal in preserving the Palisades. With support of then New York Governor Theodore Roosevelt, Perkins helped to acquire over 700 acres for the park. The project provided a model for the development of America’s National Park System.

In the 1890s, the cliffs on the west bank of the Hudson were being blasted to pieces by quarrymen and sold as road bedding to feed the fast-growing expansion of the railroad system. Trees were fast coming down as well, for use as lumber. The explosive quarry work caused consternation on both sides of the river, and led to the formation of the Palisades Interstate Parks Commission in 1900. Not long after, Theodore Roosevelt asked Perkins to serve as a member.

Elected chair of the commission, Perkins masterminded the complex, multi-year scheme for buying up individual parcels of land until a complete, 700-acre park was created.

In 1960, the Perkins and Freeman families gave the extraordinary gift of the two former residences—Wave Hill House and Glyndor House—and 28 acres to the City of New York to be opened to the public. This magnanimous decision was consistent with the family’s long tradition of public service and George W. Perkins’ personal commitment to conservation. Wave Hill has benefited significantly from the family’s continuing support, governance and interest in the transformation of this institution from a homestead rich in history to an invaluable public resource.

By the time Wave Hill was established as a non-profit and its first horticulturists in place, the gardens had become dilapidated.

Since the mid-1960s the gardens have been transformed, guided by the superb skills of generations of Wave Hill gardeners, beginning with its Founding Director of Horticulture, Marco Polo Stufano. What follows are snapshots of some of the surprising transformations that occurred once Marco Polo Stufano took the reins. 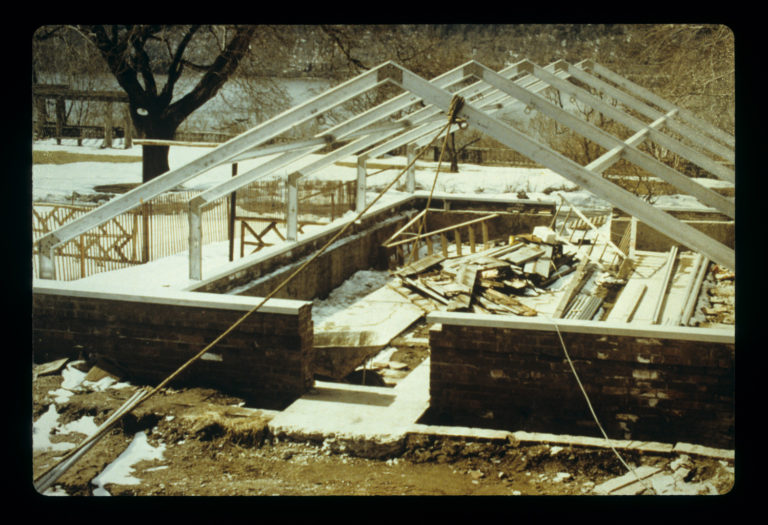 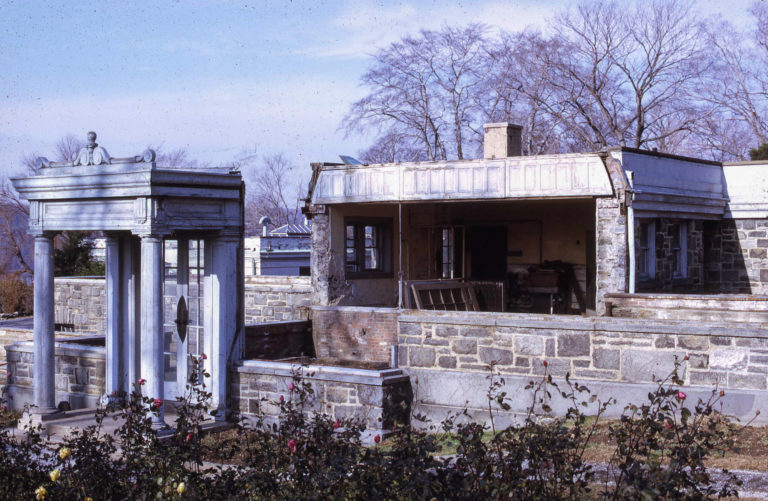 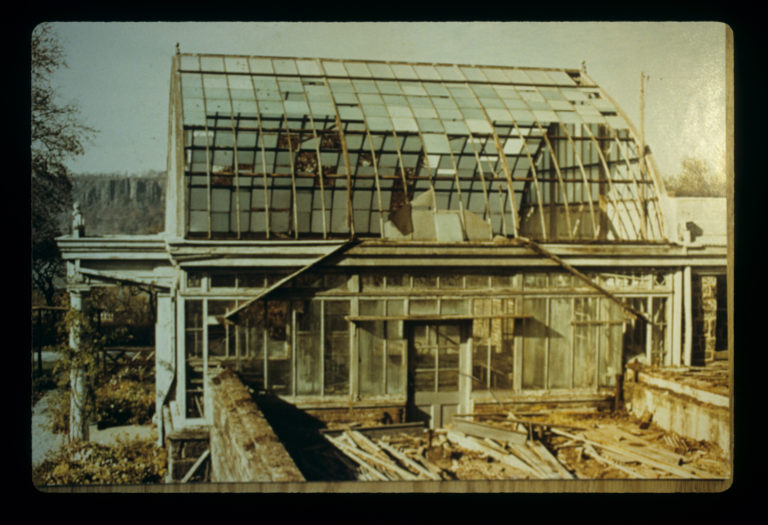 Now the home of three distinct spaces—a Palm House at the center, a Tropical House on the left and a Cactus & Succulent House on the right—the Marco Polo Stufano Conservatory was rebuilt in 1969. 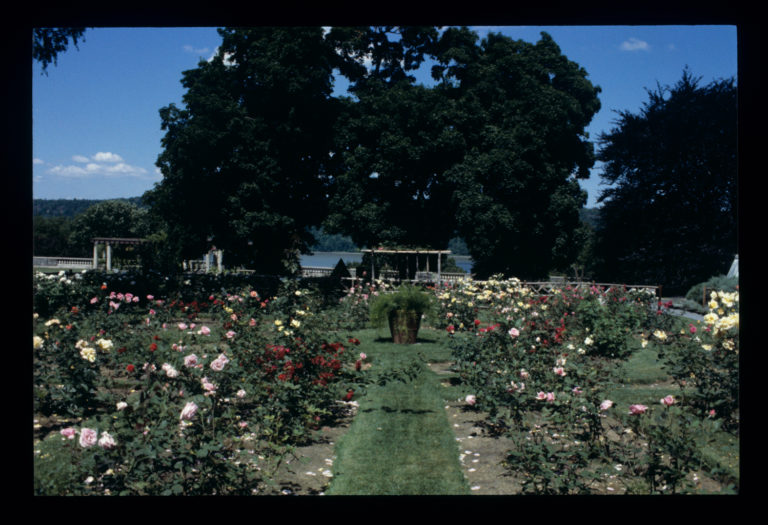 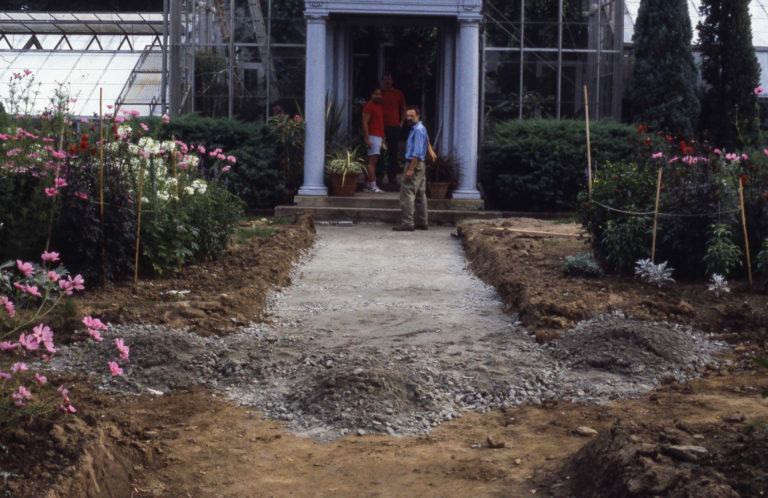 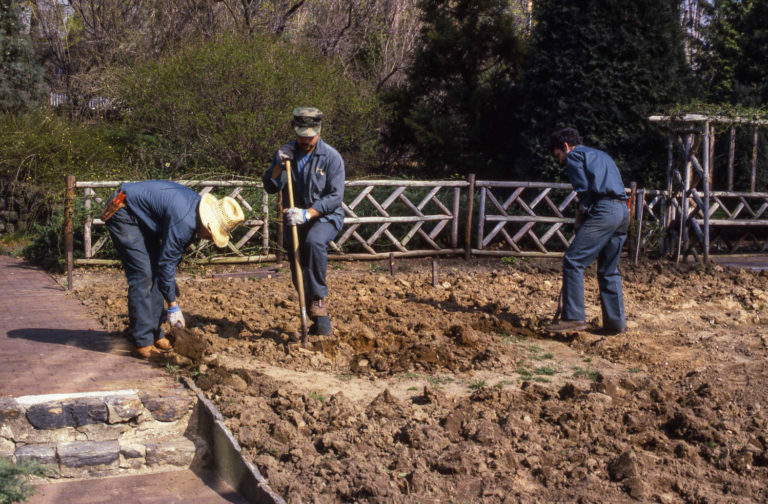 Originally a rose garden, all that remains from that era are climbing roses on the arbors on the east and west side of the Flower Garden. 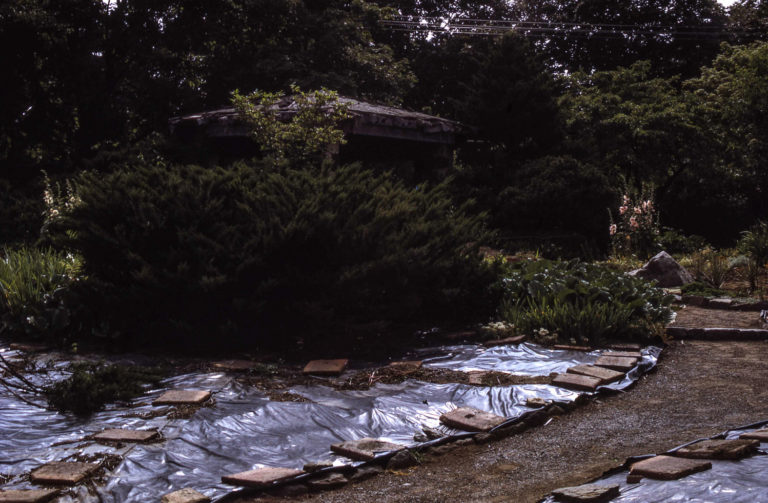 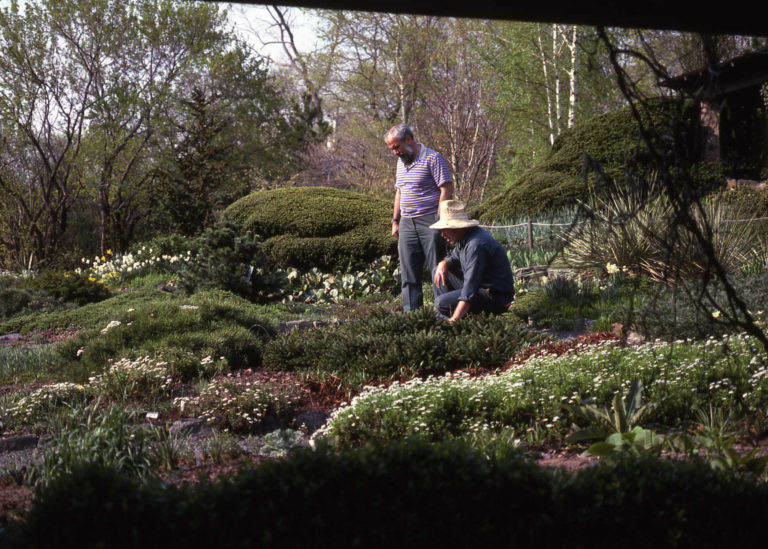 The Wild Garden, originally built in 1915. By the time the city took ownership, its pathways were eroded by rain, bindweed ran rampant. 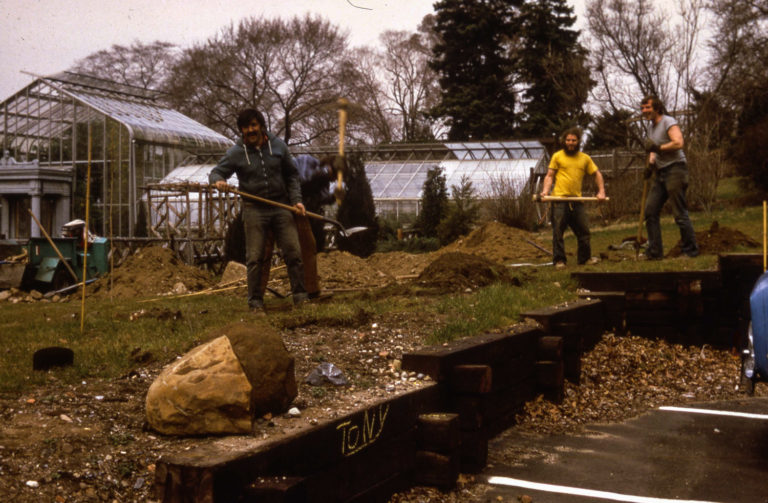 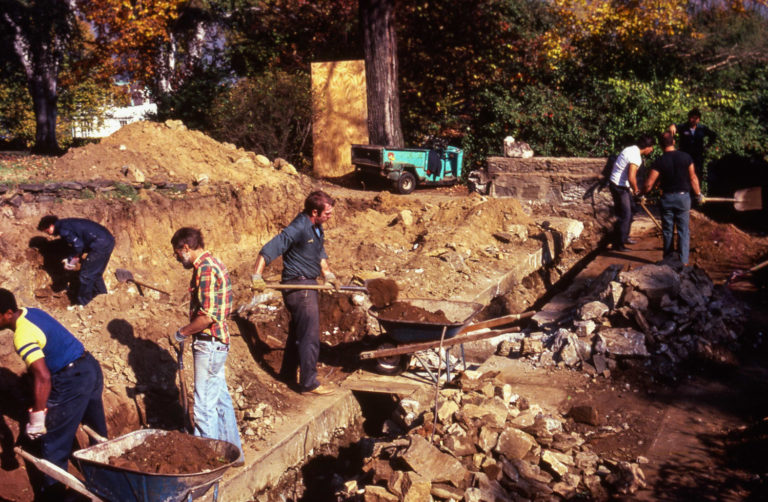 The tennis courts original to the estate were transformed into a parking lot.

The natural beauty of the area in which Wave Hill is located is so spectacular, it inspired American authors and painters to describe and celebrate our young nation’s distinctiveness. The Hudson River school of painting (1825–1875), which flourished at the same time as William Lewis Morris became interested in the Wave Hill site, is characterized by dramatic American panoramas that depict this scenic landscape. Riverdale's romantically rugged terrain and magnificent vistas provided a sharp contrast to nearby Manhattan's crowded inner city.

A rise in interest in this school of painters since the end of World War II roughly parallels the growth in national awareness of environmental concerns and the evolution of Wave Hill from private estate to public garden.