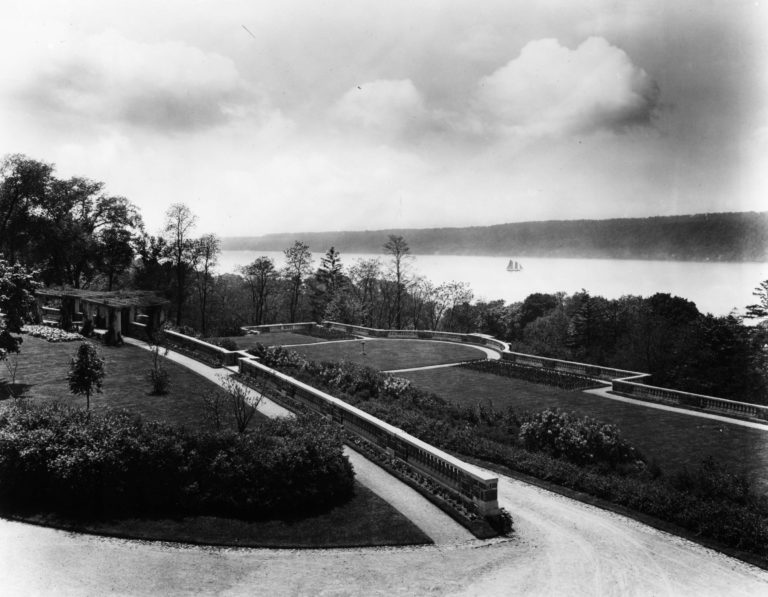 From Prehistory through the 18th Century 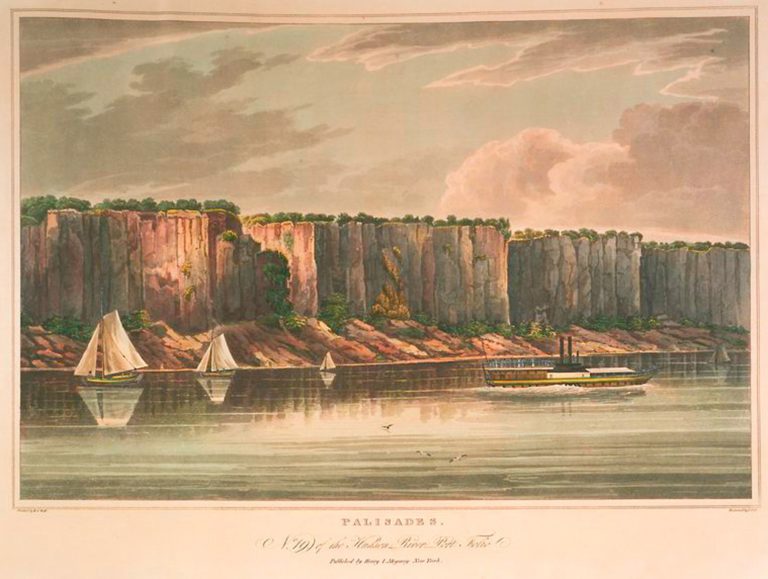 "Palisades No. 14," an aquatint engraving by John Hill of a watercolor by William Guy Wall from the early 1920s, shows the famed cliffs barren of trees.

Massive glaciers that covered New York City formed, reformed and then finally receded thousands of years ago to reveal the cliffs of the Palisades. Fordham gneiss and Manhattan schist, hard bedrock originating over a billion years ago, shape the dramatic geology of Wave Hill's site. Together, they formed the Riverdale ridge running north-south. Marble, which is softer and more susceptible to erosion, wore down over time to form the Hudson River valley. Both sides of the Hudson River were difficult to reach by inland route; the far side of the river did not lend itself to agricultural use. The first human presence was Paleo-Indians, hunter-gathers following herds of mammoth south.

Wave Hill is part of an area of land stretching from the top of Manhattan to Poughkeepsie along the east side of the Hudson River. This is the ancestral homeland of the Lenape tribe of Native Americans, starting about six thousand years ago, long before any European settlers arrived in the area. Along the river, they managed the forests, fished and collected oysters, mussels and clams, trading with surrounding tribes and traveling up and down Muhheakantuck, “The River That Flows Both Ways,” in dugout canoes made from tulip trees. Further inland, they had started to cultivate maize, beans and squash by the time the Dutch arrived in the early 1600s.

While the Dutch were encouraged to negotiate with Native Americans they encountered to purchase land, tensions arose, especially around the idea of ownership. By the 1750s, those Native Americans who survived the conflicts and disease the settlers brought with them were forced out of their homeland. A few have survived in the northeast but most forcibly relocated west by the US Government in the mid-1800s. Others joined the Delaware tribe living in modern-day New Jersey and Pennsylvania. Today, their descendants live in Oklahoma, Wisconsin and Canada.

In colonial times, this area was first a small part of Adriaen van der Donck's large patroonship, purchased from Native Americans living in the area, almost certainly Lenape, whose territory extended from eastern Pennsylvania into southern New York. Tenant farmers supplied food to both New York City, then focused around the tip of Manhattan, and to slave plantations in the Caribbean. Later, the patroonshop became part of Philipsburg Manor, then owned by Frederick Philipse III, who sided with those loyal to Britain, The manor was confiscated and broken into parcels to be sold to local farmers.

The northwest Bronx was included in the new township of Yonkers, and present-day Wave Hill sold to two local farmers, George and William Hadley. In the 1790s, they sold it to two farmers from New Jersey. A winding road still runs through Wave Hill's woodland where the original farm road ran down to the landing dock at the edge of the Hudson.

Today, Wave Hill wrestles with what it means to occupy indigenous land, and recognizes the fraught and often painful legacy of the space even as we work to maintain and celebrate its natural beauty and its role in bringing communities together.

"The Architectural and Historical Resources of Riverdale, The Bronx, New York, A Preliminary Survey," produced by M. D. Krugman and edited by C. H. Way in 1998 for the Riverdale Nature Preservancy.